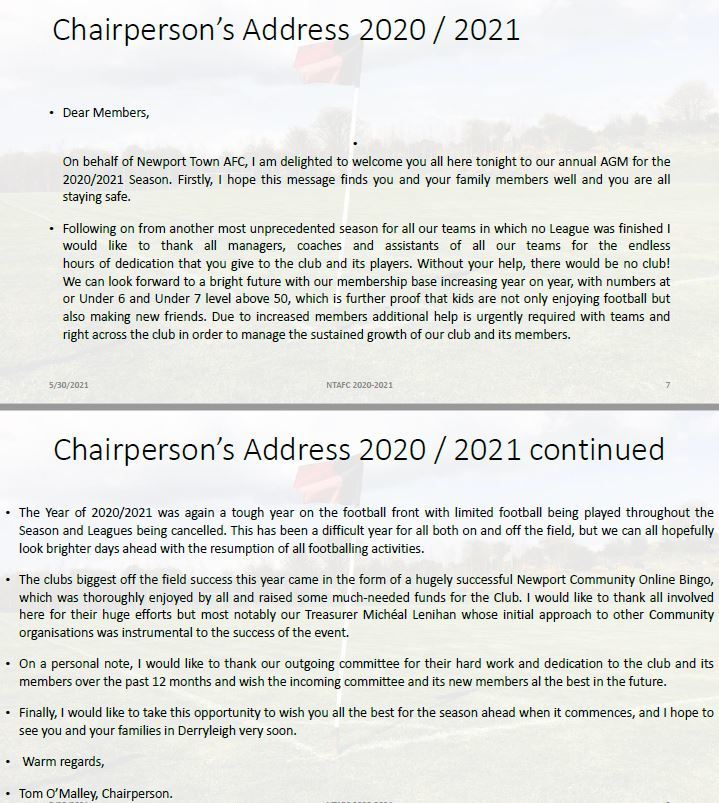 Due to the ongoing Covid-19 crisis, the club’s AGM took place online on Sunday, May 30. Outgoing Club Chairman, Tom O’Malley welcomed everyone and thanked them for their attendance. There was a minute’s silence for all deceased members. Last year’s minutes were read before Secretary, Ailbe Coffey, gave a report on the club’s activities over the past 12 months, which were limited due to the pandemic. Treasurer, Micheál Lenihan gave an update on the club’s finances, which like most voluntary organisations, have been under great strain in recent times.

The Election of Committee & Executive Committee members then took place. Richard Egan takes over from Tom O’Malley as Chairperson, Ailbe Coffey & Micheál Lenihan remain on as Secretary & Treasurer / Child Welfare Officer respectively, while Dave Noble is stepping down as Club P.R.O. after 8 years. However, Tom & Dave will remain on as Committee members. Denis O’Sullivan is stepping down from the Committee and he was thanked for his dedicated service to the club.

The remaining Committee members re-elected were Richard Egan, Tim Coffey, Mike O’Donoghue, Lar Kennedy, David O’Brien, Peter Coleman, Seán Ryan & Andy Gleeson. Steve O’Brien was elected on to the committee for the 2021/22 season. Good luck to the incoming committee for the season ahead in what continue to be exciting & busy times for the club both on and off the pitch, albeit difficult & strange times due to Covid-19. The communitys' support of our fundraising efforts has been greatly appreciated.

If anyone is interested in becoming a new Committee member or willing to lend a hand in any capacity on or off the field, should contact Club Secretary, Ailbe Coffey or any current Committee member as soon as possible.

Last One Standing is coming back, starting Friday, August 13

Our popular Last One Standing fundraiser is back. Enter a...

Our popular ‘Clothes Collection’ continues 🧥👞👠👛👖👗👕Are you...

U15 Girls unlucky to lose Shield Final in 9 goal thriller

Congrats to Youth player Diarmuid O'Riordan on making the...