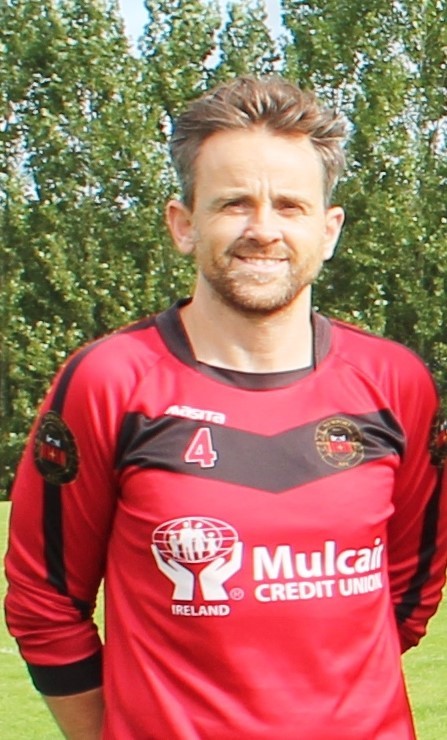 The next guest in our series of Derryleigh One-on-One interviews is a player who has seen it all during his long and varied playing career and is still rolling back the years, as a prominent member of the A team squad. We welcome keeper, turned outfield player, Jimmy Fyfe, to the hot seat.

Jimmy has enjoyed a great football career with a highlight being a man of the match performance in Limerick FC’s League Cup Final win over Derry City in the Brandywell in 2002. Jimmy has been playing with Newport for the past 3 years but his playing career has seen him play with a number of previous clubs including Murroe, Pike Rovers, Limerick FC, Waterford Utd, Bridge Celtic, Corbally Utd & Aisling Annacotty before he finally saw sense. For those of you that haven’t seen him on the soccer pitch, you might have seen him in action on stage at a wedding or function, as he’s one half of the popular band Traffic.

Thanks Jimmy, for taking the time to take part and putting yourself under the spotlight. Hopefully the questions aren’t too tricky. We’ll start off with a few gentle ones.

Q. How long have you been involved with Newport Town AFC?
3 years

Q. Do you have any nicknames?
Speedy.

Q. What are your hopes for the next couple of seasons in NTAFC?
Would love to see the club go Premier. It’s a fantastic club and deserves to be up there.

Q. What professional soccer team do you support and why?
Don’t have a club I support really. When I was a kid, I liked Aston Villa because a lot of the Irish team played for them. Now, I just like watching the big games.

Q. Who are your favourite professional players (both past & present)?
Loved Paul McGrath, Packie Bonner and Peter Schmeichel when I was younger, but now, I think the likes of Messi and Ronaldo are just on a different level.

Q. In your opinion, what qualities make a player a good team captain?
A good captain should be honest and hardworking and lead by example on and off the pitch. He doesn’t have to be the loudest player all the time. Players can see through bluffers. All of the qualities that hero Clemy has.

Q. Who’s the joker in the A team dressing room?
Davy Ryan. Great guy to have around, to keep the craic going.

Q. What takes up your time when you’re not at the Club?
My kids mostly. Love spending time with them both (Colin and Lilly).

Q. What type of player were you as a schoolboy?
I was ok but I should have worked a lot harder.

Q. Who is your favourite cartoon character?
Homer Simpson.

Q. What is your favourite film?
All three of the Back to the Future movies. I love comedies too.

Q. What is your favourite band / singer?
Sting and The Police.

Q. What series are you currently watching on Netflix?
New Girl. Was forced to watch the first few and now I think it’s great.

Q. You’re one half of the popular band, Traffic. What’s your favourite song to perform on stage?
Africa by Toto.

Q. Do you have a special routine or superstition in general or before a game?
Nothing really. Just make sure I have everything before leaving the house.

Q. In the A team squad, who is the Manager’s pet?
Don’t think he has one. He is pretty ok about dropping anyone.

Q. Who (in your opinion) was the best player you ever played with or against?
Played with: I played with some great players over the years, but I have to say Paddy Purcell who played for Limerick was consistently fantastic season after season.

Played against: One player who stands out was Glen Crowe. I remember even thinking as the match was happening one night against Bohemians in Dublin, God this player is good. Movement was unreal. Also got to play against Martin O’Neill’s Celtic team in a preseason friendly with Bray Wanderers when I was about 19 and Eyal Berkovic was just different class.

Q. Who are the best & worst trainers in the A team?
At the moment I think young Daniel Egan and Killian O'Malley really work hard. They are both fantastic players with a great attitude. The club is in good hands if they are the calibre of players coming through. I'd put myself down as the worst.

Q. What’s the best piece of advice you’ve been given by a coach?
When you make a mistake just forget about it and concentrate on the next ball (easier said than done though).

Q. If you could play at any sporting stadium in the world, which one would it be?
Nou Camp in Barcelona. Went there on a tour a few years back and it’s unreal.

Q. Who would win an arm wrestling competition amongst the A team squad?
Christy O’Connor. Glad I’m playing with him and not against.

Q. What other sport(s) do you love to play, and how would you rate your skills?
I like tennis but I’m very poor at it. It’s something I’d like to take up more of when I’ve stopped playing football

Q. What was the defeat in a football game that still haunts you?
Ah I try not to get too bad after games. It hurts for few weeks after, but move on then.

Q. On the contrary, what’s the victory that brings back the best memories?
I have two: When Peter (LaFleur) O’Sullivan scored the winning penalty for Newport to beat Carbury Utd from Sligo in the FAI Junior Cup last 64 in December 2018. Everyone came running onto the pitch to celebrate. Was a great feeling to win a big game like that for your local team.

The other was winning the League Cup for Limerick in 2002 on pens in Derry.
(Editor. Jimmy won’t say it himself “but the undoubted hero for Limerick that day was inspired goalkeeper Jimmy Fyfe, who pulled off a trio of top-drawer saves during the final minute of normal time and saved Derry's final two penalty kicks in the shoot-out” from the Irish Times).

Q. Best thing about living in Newport?
Just the great sense of community. We are very lucky to be living in such a nice place and should appreciate it more.

Q. What’s the most recent playlist or artist you’ve listened to on Spotify?
Probably just some cheesy 80’s song.

Q. What one word would others use to describe you?
I don’t want to think about that!

Q. You played as a keeper in the League of Ireland and now play outfield with Newport. Which position do you prefer?
I loved my time playing in goals and it gave me some great memories but now I much prefer playing outfield. Goalkeeper is a tough position.

Q. What is your favourite memory to date of being involved with Newport Town AFC?
Again, that Carbury game in the FAI cup. They were heavy favourites to win and when they arrived at Derryleigh Park, were extremely cocky. It was great to send them home with their tails between their legs.

Q. If you could change or bring in one rule in soccer, what would it be?
Get rid of VAR. I liked the human error aspect of the game.

Q. What’s the funniest or strangest thing you ever saw happen during a match?
That friendly game in Bray against Celtic. A streaker ran on to the field. It was a cold evening by the seaside, so you can imagine the laugh we had.

Q. Who has had the biggest impact on your soccer career to date?
My Dad. Was always there playing football with me as a kid and gave me great advice all the way through. Rarely missed one of my games.

Q. If you had one wish, what would you look to change/implement in NTAFC?
I honestly think the club is fantastic. I don’t think the people appreciate how lucky we are to have these facilities on our own doorstep. The work that has gone into it is unreal.

Q. What advice do you have for the younger NTAFC players?
Keep playing as long as you can. You’ll be long enough wishing for one more game.

Q. Finally, what’s been your greatest achievement or most memorable moment in football?
I got an under 18 cap for Ireland and that League Cup win with Limerick.

Thanks Jimmy, some great answers there and a great insight into your career and your thoughts on football. Great to be able to have a player with your experience in the club to pass on your knowledge to the younger players. We hope that the slagging in the A team Whatsapp group isn’t too bad.

With so many training sessions taking place in Derryleigh...

Despite the Level 5 Covid-19 lockdown, our underage sides...

Stuck for a Christmas Present?

🎅Stuck for a Xmas present or stocking filler? Forget abou...

Despite the Level 5 Covid-19 lockdown, our underage sides...

Are you clearing out wardrobes or de-cluttering? We can ...