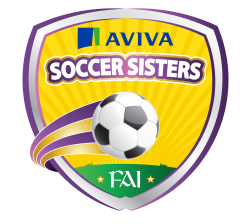 The Football Association of Ireland and AVIVA have launched a new virtual Aviva Soccer Sisters programme specially designed for girls to take part in during the upcoming October mid-term break.

The free online initiative was launched today by Republic of Ireland Women's National Team player Áine O'Gorman ahead of Ireland’s upcoming UEFA Women's European Championship qualifier against Ukraine. The online skills series will be rolled out daily at 10am through the week of 26th October via Aviva’s website.

Created by accredited FAI coaches, a new skills video will be released each day demonstrated by the members of the Ireland Women's National Team and some Aviva Soccer Sisters. The video series caters to young girls of all ages and skill levels and is the ideal way for parents to keep their budding soccer darlings entertained and inspired over the Halloween break.

The virtual Soccer Sister programme is a safe online space for young girls to develop their social skills and love for the game over their mid-term break. See aviva.ie/soccersisters or Aviva’s Social Media channels @AvivaIreland each day at 10am to access the videos.

Throughout the week, parents and guardians are encouraged to capture images and videos of their own soccer stars taking part at home. Aviva are giving away 1,000 Aviva Soccer Sisters winter training tops for the top images and videos posted on social media using the #SafeToDream.

To launch the Aviva Soccer Sisters hub, Aviva Ireland has released an inspirational video starring Áine O’Gorman and budding underage players, highlighting the joy football brings to girls’ lives, while encouraging them to chase their sporting dreams. The video can be viewed on Aviva’s website here: aviva.ie/soccersisters.

Ireland Women's National Team star, Áine O’Gorman, said: “When I was growing-up, I only had male role models. Now however, young girls can have female role models and realise earlier that they can live that dream and the opportunities are there for them to maybe one day represent their country. The likes of the Aviva Soccer Sisters Campaign and exposure of the game helps. I think you should always dream big and if you want to achieve playing for Ireland it is in your own hands.”

The FAI's Sue Ronan said: “Aviva Soccer Sisters has been one of the driving forces behind the increase in the number of girls participating in grassroots soccer over the past number of years, and we’re thrilled to be partnering with Aviva to bring it back again this year in this innovative online forum. All girls should have an equal opportunity to get involved in football and Aviva Soccer Sisters gives them that chance. This year Aviva Soccer Sisters will be a little different due to the current restrictions as a result of Covid-19, but we are thrilled we can provide a virtual experience this year and continue to support young girls who have a passion for sport and football. Players will be invited to submit their own videos, copying various skills demonstrated by players from the Women’s National Team”.

Each day clips will be selected and shared on Aviva’s social media platforms to showcase the skills submitted by footballers nationwide.

Brian O’Neill, Head of Communications, Brand and Sponsorship, Aviva Ireland said: “Aviva is proud to partner with the FAI again this year to provide the Aviva Soccer Sisters virtual hub for young girls to give them the opportunity to learn some core  skills while having fun in a safe online environment. Over the past 12 years we have seen girls who have taken part in the Camps and have progressed to the next level which is inspiring to see. We are committed to supporting the FAI and their mission to get more young girls involved in football. It’s great to have a football star like Áine O'Gorman as an ambassador for the Aviva Soccer Sisters Programme, and one that shows young girls that it’s Safe To Dream.”

Our lotto continues during lockdown. You can securely ent...

The latest update from FAIreland in relation to the Level...

Calling on all our supportersWith the Covid restrictions ...

Best of luck to one of our own former Soccer Sisters, Sha...

What should have been!

Today's the day we should all be recovering from a great ...

With the Covid restrictions in place, all leagues are sus...