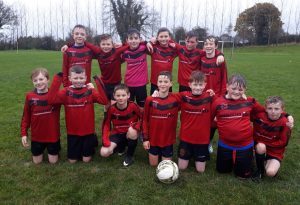 At a wet and windy Derryleigh Park, our U12 (2008) boys pulled off a great win in round 3 of the Skechers National Cup, defeating league rivals Shelbourne on a scoreline of 5-3. A brilliant start from Newport saw them race into a 3-0 first half lead with goals from Scott Nugent and Cormac Shanahan (2). Ollie Roche and Luke McIntyre were on top in midfield, with Patrick O’Shea linking well in the front three. Goalkeeper Eoin Mac Craith was called into action several times in the second half, making some great saves and distributing the ball well for his team mates. The skilful Shelbourne side forced their way back into the game with a rebound off a great save, but Newport responded immediately with another well taken Scott Nugent goal. Conor McLoughlin, Darragh McNamara and Liam Lynch worked effectively as a back three, getting the team going forward with some great passes. Shelbourne never gave up and a well taken strike brought it back to 4-2 before Lucas Wright added a 5th for Newport. Shelbourne kept pressing and scored again late in the game to close the gap once more, but Cian English, Conor Ryan and Leon O Donoghue rounded out a brilliant squad effort by the Newport lads who will travel to take on the winners of Granagh v Herbertstown in Rd 4. Final score in Derryleigh, Newport 5-3 Shelbourne.

Well done to the coaching team of Fiachra MacCraith, Michelle Rafferty, Keith McIntyre & Andrew Whelan. Thanks also to the supporters who braved the elements to support the lads. Finally, great credit is due to the ground staff crew of Tim Coffey, John O’Brien & Eddie Gleeson who had the pitch in great condition on a day when most pitches would not have even been playable.